Inhibitors of core proteins involved in the DDR such as the poly (ADP-ribose) polymerase, PARP1, have been utilised to significant therapeutic effect in tumours harbouring mutations in DDR pathways, such as homologous recombination. These mutations render tumours exquisitely susceptible to inhibition of PARP1. This concept of ‘synthetic lethality’ has underpinned the approval of PARP1 inhibitors in BRCA-mutated ovarian, breast, prostate and pancreatic cancer. 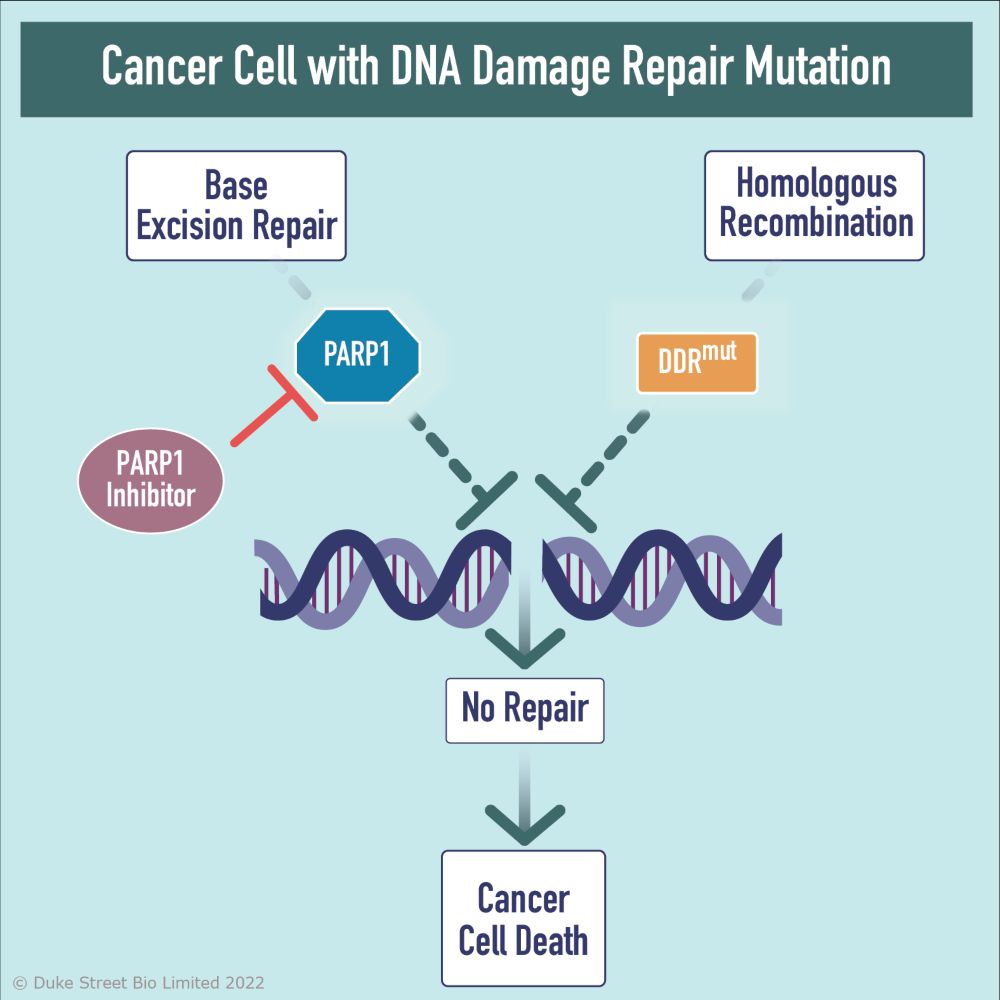 First-generation PARP1 inhibitors have provided significant therapeutic benefit to patients whose tumours exhibit homologous repair deficiencies including BRCA mutations, however their use has been associated with haematological toxicities that have restricted their application, particularly in combination with standard-of-care chemotherapy. All four FDA-approved PARP1 inhibitors are largely non-selective for the closely related enzyme PARP2, inhibition of which has been shown to drive haematotoxicity.

Despite the remarkable clinical success of cancer immunotherapies over the last decade, most patients either fail to respond to immune checkpoint therapy or develop resistance. Cancer is a disease that uses a variety of methods to cloak itself from the immune system and to suppress the activity of immune cells in the tumour microenvironment. ‘Cold’ tumours that are not inflamed and are devoid of immune cells, fail to respond to immunotherapy. At Duke Street Bio we are developing molecules that modulate the activity of key enzymes that convert these immune-resistant ‘cold’ tumours to immune-responsive inflamed ‘hot’ tumours.

PARP7 is an enzyme that adds mono-ADP-ribose groups to a variety of substrate proteins thereby regulating their function. One such substrate is the kinase TBK1 which regulates activity of cGAS-STING and RIG-I nucleic acid sensing pathways. Up-regulation of PARP7 expression in cancers, particularly those of squamous pathology, applies a brake to cytosolic nucleic acid sensing and the Type I interferon response. This creates an immunosuppressive tumour microenvironment (TME) leading to faster tumour growth. Duke Street Bio is developing potent and selective inhibitors of PARP7 that disengage this brake, restoring Type I interferon signalling in a TME-intrinsic manner that induces innate and adaptive immunity, leading to tumour elimination. 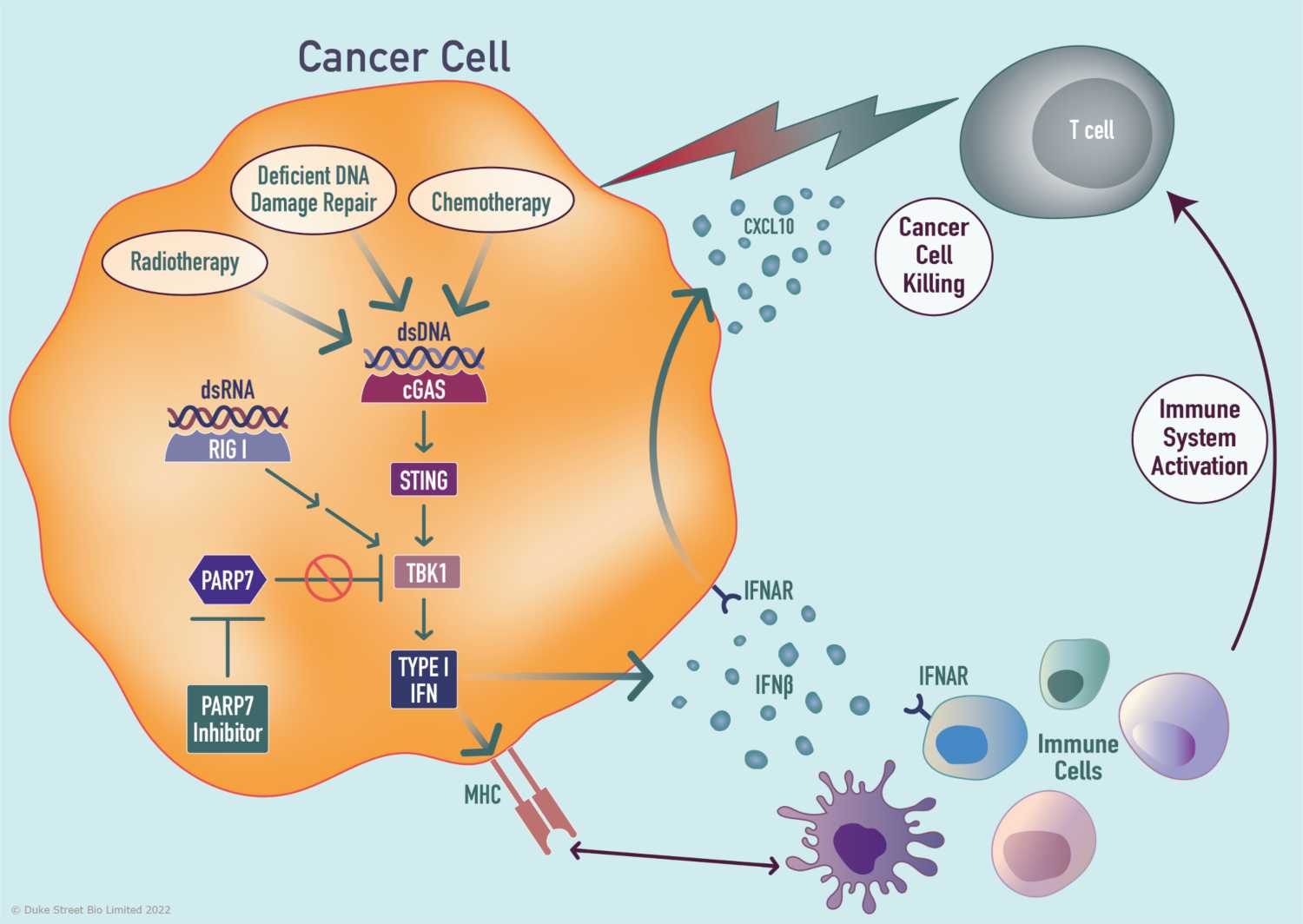 One hallmark of cancer is high genomic instability. Therefore, PARP7 inhibitors have significant therapeutic potential in tumours that harbour genetic vulnerabilities such as deficiencies in DNA damage repair that lead to elevated levels of aberrant cytosolic dsDNA and dsRNA. Additionally, exogenous agents such as chemotherapeutics and radiotherapy, which promote DNA damage and higher levels of cytosolic nucleic acid, work in concert with PARP7 inhibitors to drive type I interferon signalling and the induction of the immune response.

PARP7 inhibitors effectively act as a bridge between the induction of DNA damage via DDR deficiencies or exogenous agents and stimulation of innate and adaptive immunity in the tumour microenvironment, enhancing the efficacy of immune checkpoint blockade. 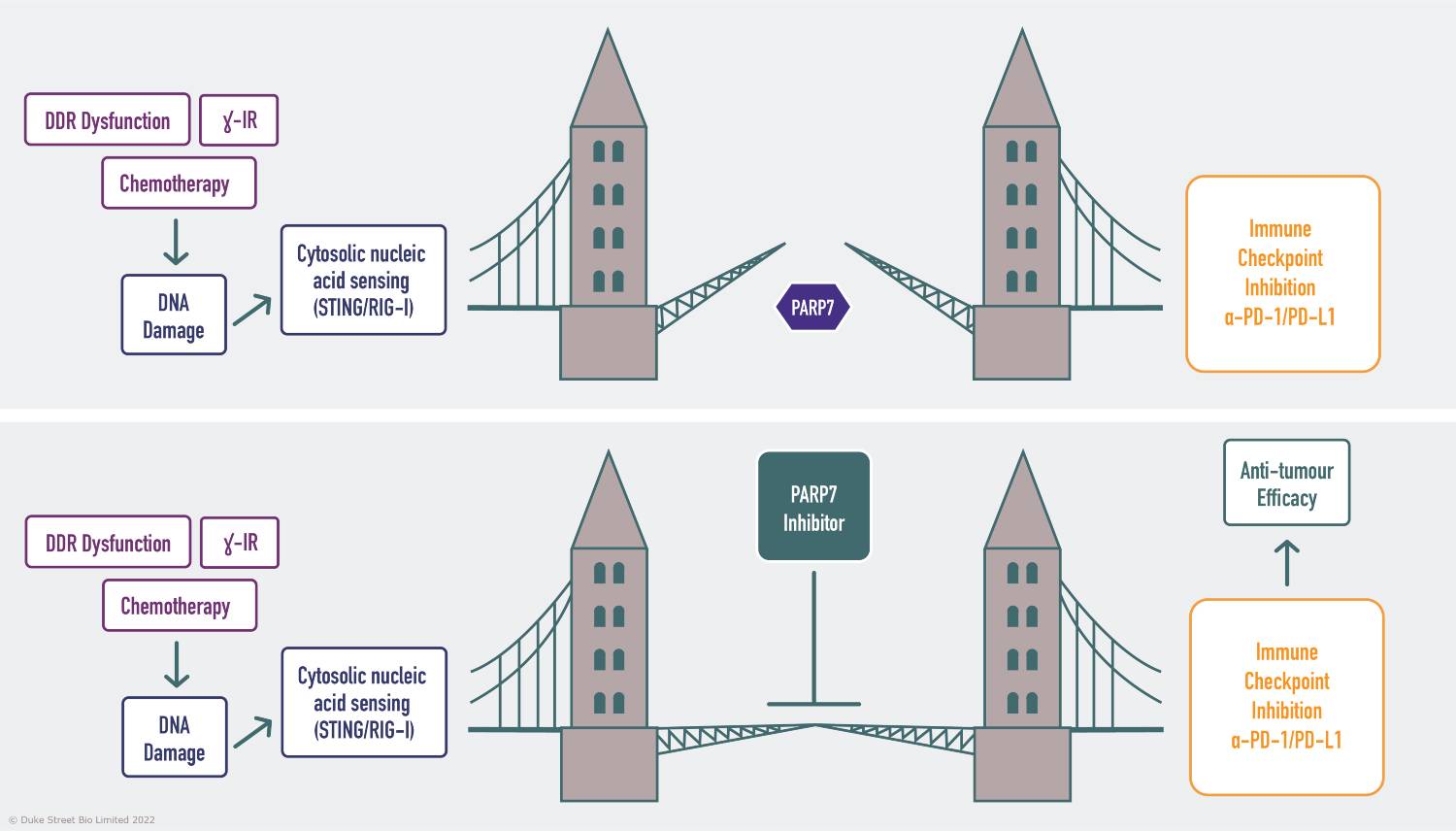